Part of my cellar

Continuing with my journey into the world of pipe smoking, I thought I would show what my cellar1 looks like. It’s not much—just some jars and a pipe stand on my dresser—but it’s more than what I’ve seen some other people have2. I’ll talk about tobacco in another post; this one is just about what’s on the left of the picture below. The paper is something I saw in a YouTube video and I thought it was a really cool idea; rather than pinching your tobacco out of the jar, sprinkling it into the bowl, and inevitably spilling some, simply dump it onto a sheet of paper. From there, you can pull apart any clumps that may have formed, fill the bowl, then fold the paper in half lengthwise and pour what’s left back into to the jar. 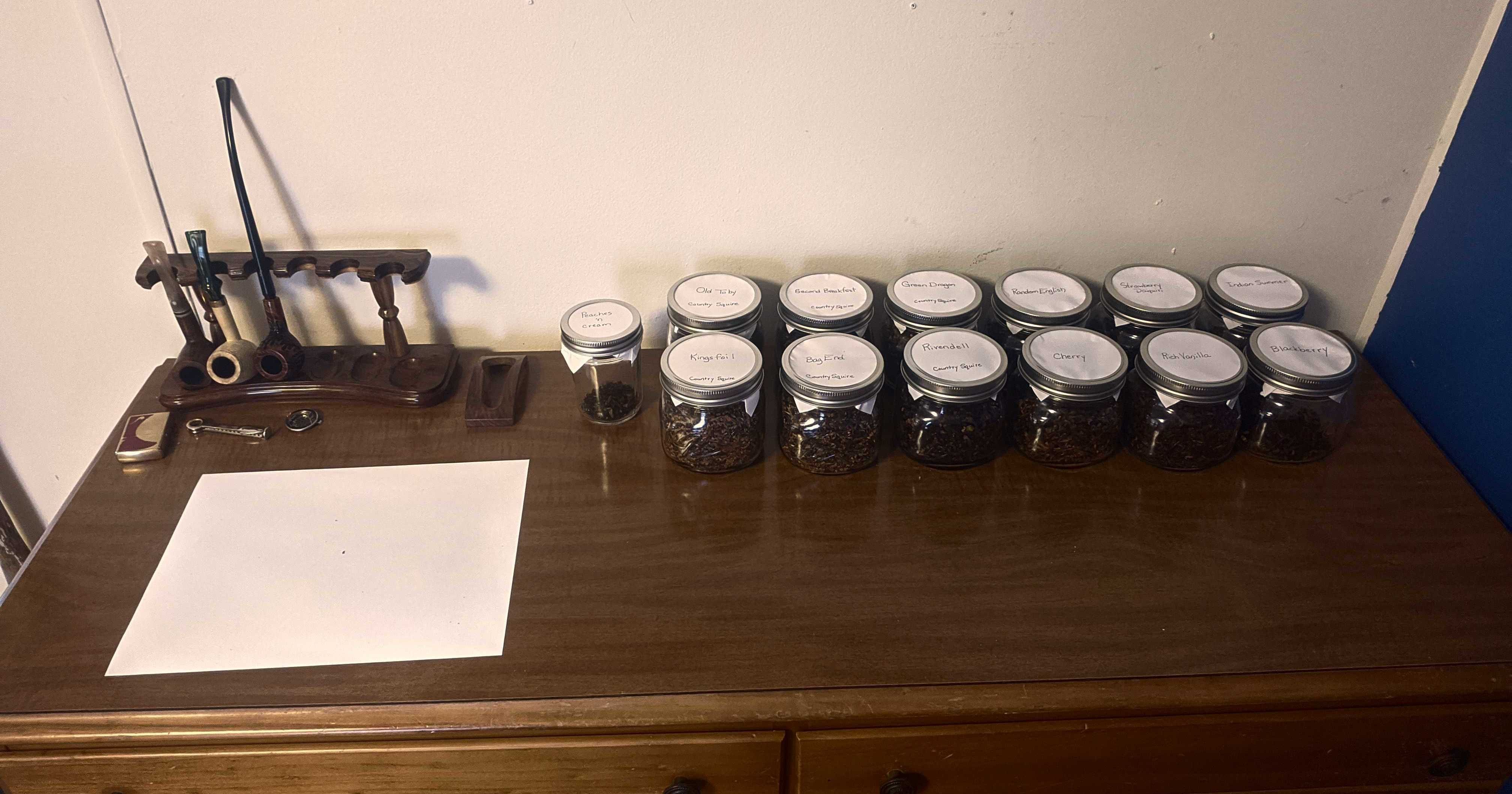 The small stand to the right of the big one is the Single Pipe Stand from SmokingPipes. I do like it but it’s really only suitable for pipes with straight3 stems; with bent stems, the mouthpiece ends up resting on the table. I haven’t tried it but I would recommend going with the solid version if you’re wanting a stand for a single pipe because it’s more versatile. The larger one, below, is the Woodmere 6 Pipe Stand from the same website. It has the same problem as the first but it’s not as pronounced; pipes with bent stems need to be pushed forward in the divot in the base so they can lean back against the bar. Otherwise, the weight of the stem and shank4 will cause them to fall forward.

Pipes will be described further down so the next thing is the metal object that looks like a sink drain. It’s a wind cap from The Country Squire (which also has a great podcast). I’ve found it to be very handy at my university when it’s windy. The next item is just a simple “Czech pipe tool” that can be purchased from pretty much any store that sells pipes, both brick-and-mortar and online retailers. The last thing is a Zippo pipe lighter. These are entirely different from normal Zippo lighters because they’re meant to be held sideways over the bowl of a pipe. This design lets you put the flame directly to the tobacco rather than drawing it over the side of the bowl and scorching the rim. I ordered mine from Amazon a year or so ago but have since stopped using Amazon due to ethical and privacy concerns. I can’t find the same product on Zippo’s website so here’s a link to it from Wal-mart. I also dislike using Wal-mart but it’s marginally better than Amazon. 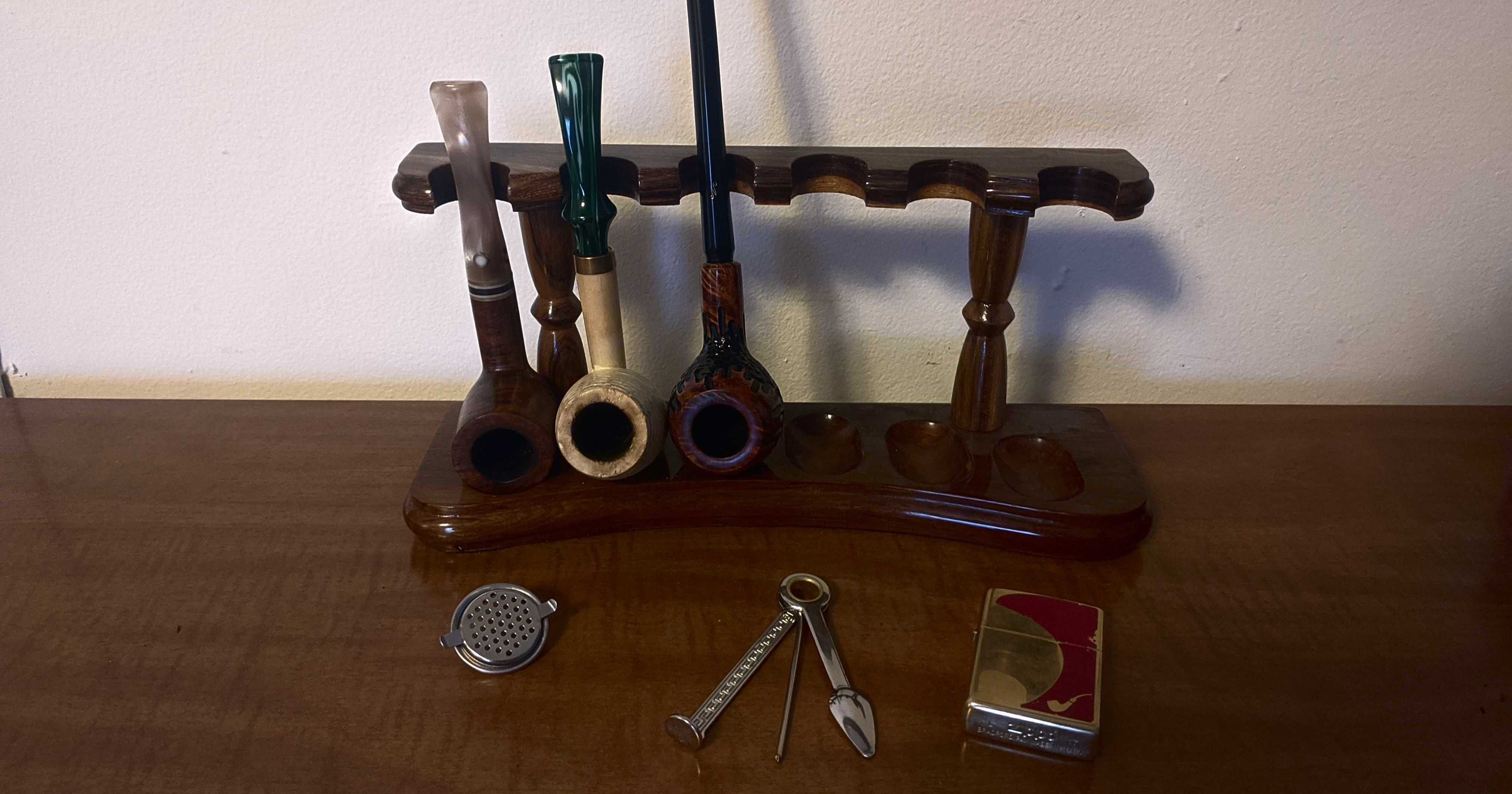 Now the fun part 😉 The first pipe I got was the Missouri Pride from Missouri Meerschaum. An excellent starter pipe, I ended up giving it to my room mate after he showed an interest in the hobby. However, a close friend of mine had given me one of his old pipes and I fell in love with it. Unfortunately, I know absolutely nothing about it other than it was made by Mauro Armellini, an Italian craftsman who died several years ago. I’m considering sending an email to the company and seeing if they can tell me anything about it. On one side of the shank is the name Mauro Armellini, the bottom has the number 705, and the other side says Verona with the word ARCOBALENO below it. If anyone reading this knows something about the pipe, please let me know.

The first “real” pipe I bought myself was a churchwarden5 from Nørding Pipes. If you’re curious about the company or the founder, Erik Nørding, listen to this episode of the Country Squire Radio. After I heard it, I decided to make one of their pipes my first purchase. What I ended up getting was a Partially Rusticated6 Churchwarden from SmokingPipes. I’ve been using it for a month or so now and absolutely love it, especially when I’m sitting on the porch reading or going lunting7. 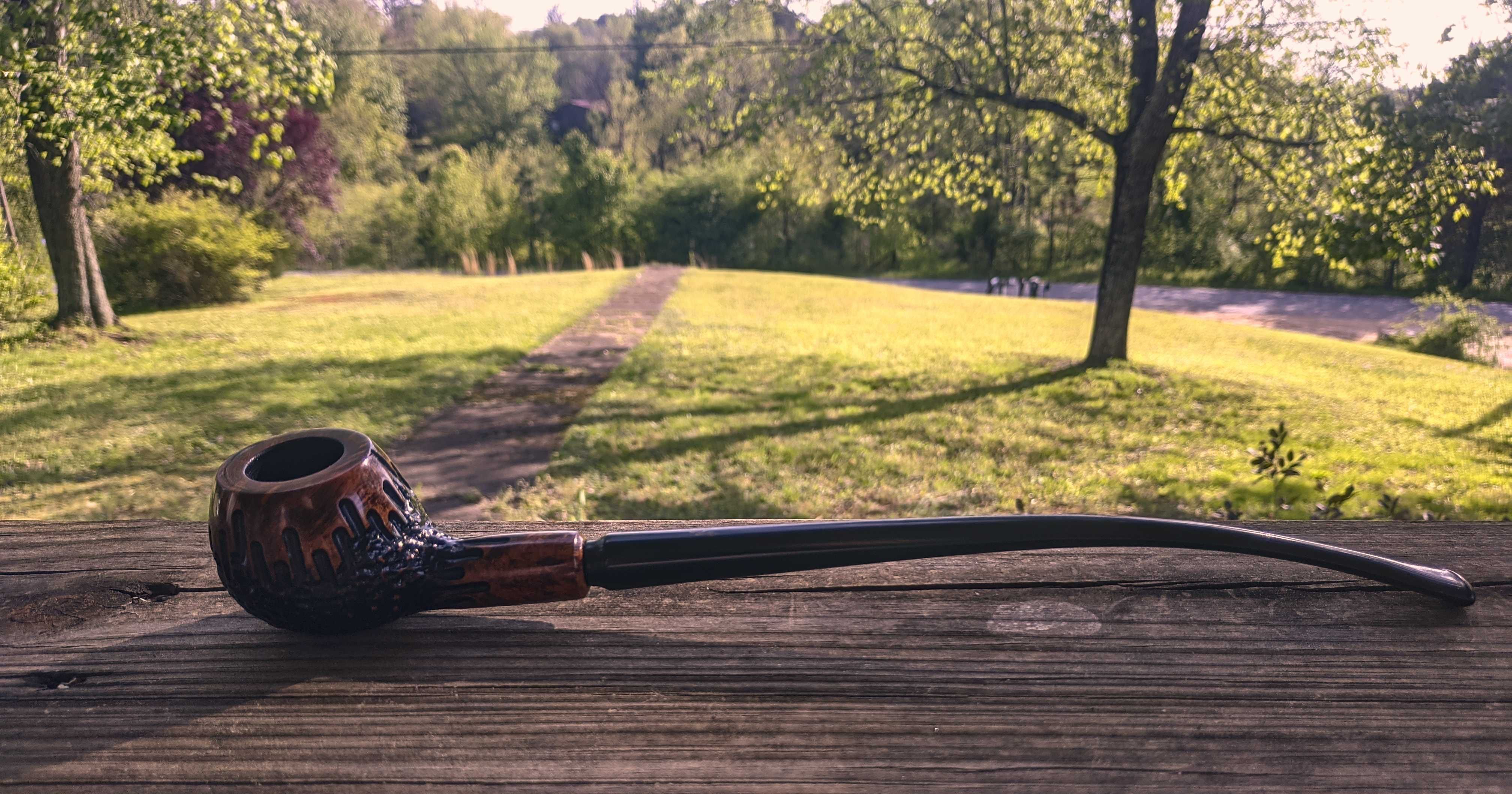 My latest acquisition is The Emerald from Missouri Meerschaum. It is a corn cob pipe but not like the Missouri Pride; this model has very obviously been sanded smooth and sealed so that it almost feels like finished wood. The stem is a higher quality acrylic than their other models and much more pleasant to look at as well. This is the model they released for Saint Patrick’s Day in 2019 but, due to popular demand, they started producing it again. I’m hoping to purchase this year’s as well and start building a collection. 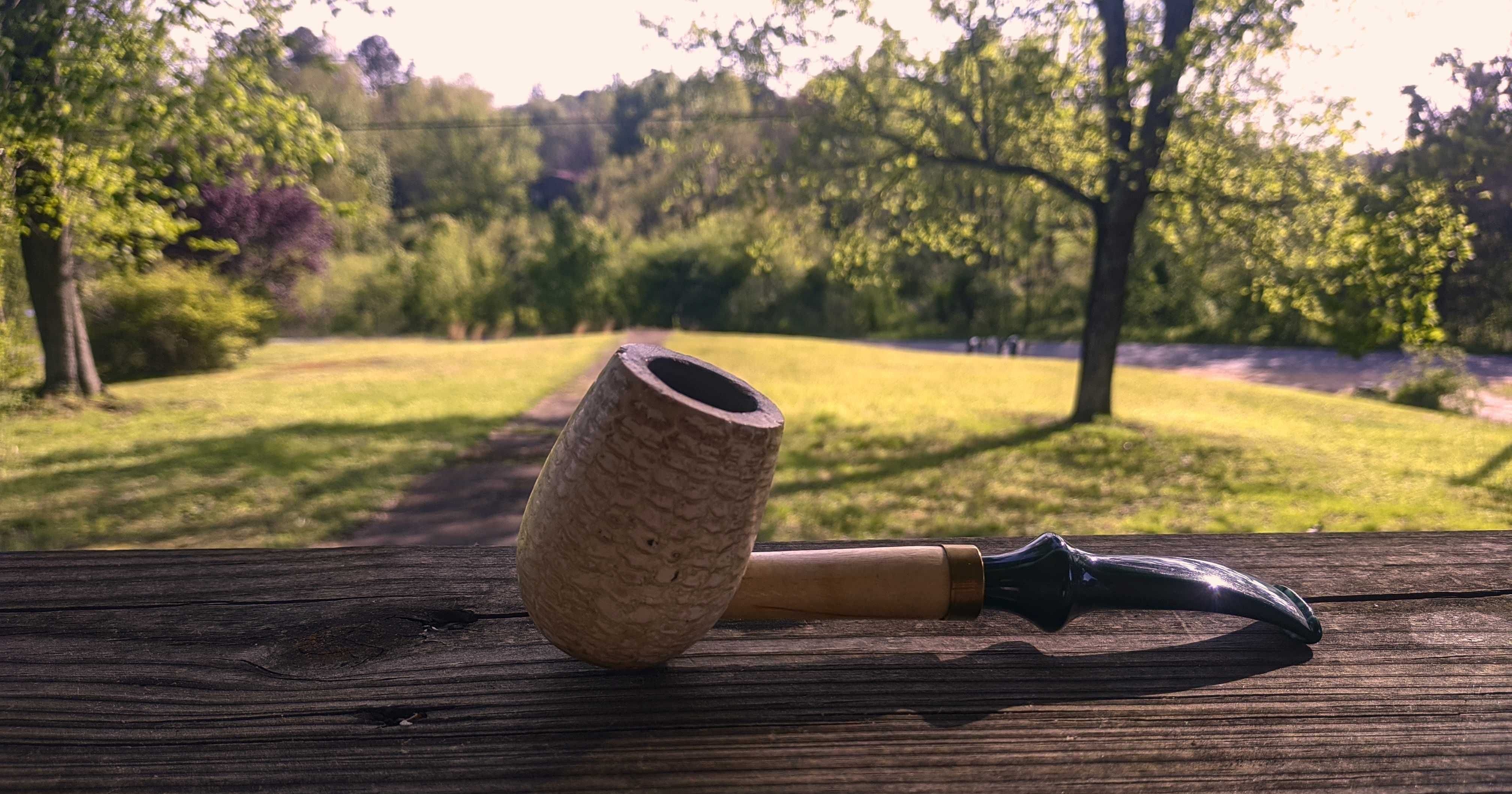 This last picture is of me sitting on my porch with a book, my churchwarden, my lighter, and my pipe tool. It was a warm and peaceful afternoon and I had a strong urge to capture the moment because this is one of the big reasons I enjoy smoking a pipe. In the rigorous life of a university student, musician, and systems administrator, this is my rare chance to just slow down and simply be in the moment without worrying over anything else. 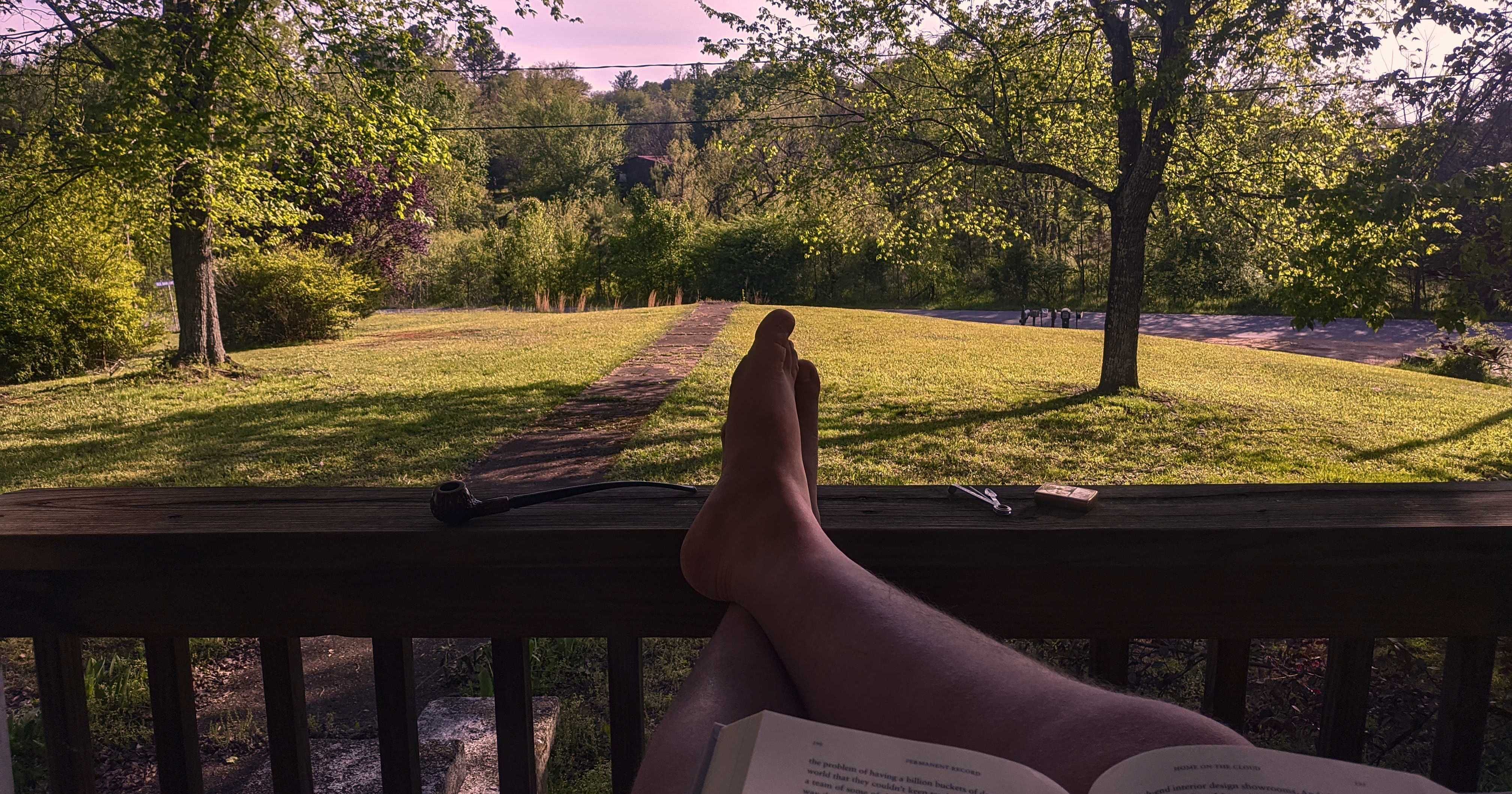 I'm experimenting with comments for a couple of months. This is a self-hosted Commento server, so none of the information entered here goes through any third parties, just my own systems.